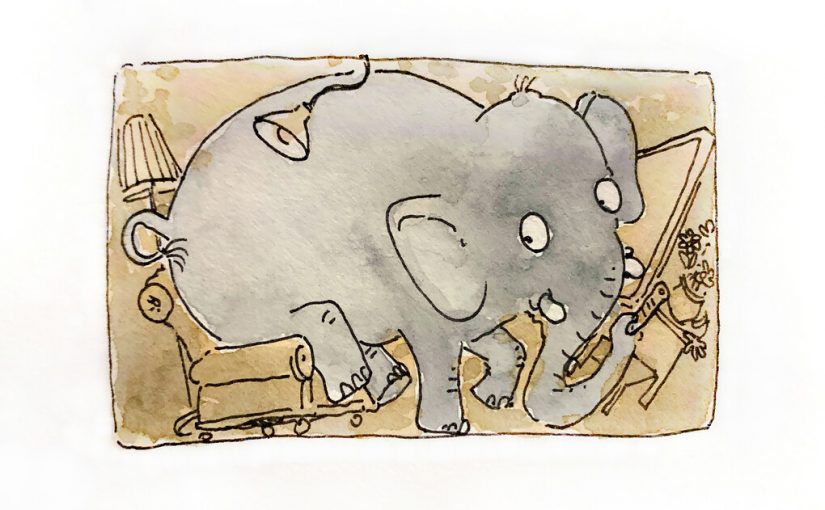 It’s an elephant, and it’s in the room – climate change.

Is it the ‘bigness’ of these two words that cause us to stall, to pull up short again and again in our efforts to make a difference, to have an impact?

Are you caught between the desire to do something and the reality of getting it done? Could it be we are collectively overwhelmed into inaction?

What if, instead of seeking to change the world, we sought to change something today?

In 2004 Ronnie Kahn, frustrated by the huge volume of food waste in her events company, began hand-delivering the untouched food to homeless shelters. Today, Oz Harvest, the company she founded, delivers the equivalent of 25 million meals a year that would otherwise be wasted. (1)

In the same year, British cycling coach David Brailsford committed to a strategy of the aggregation of marginal gains. A philosophy of searching for a tiny margin of improvement in everything you do. After nearly one hundred years of mediocrity, during the ten years from 2007 to 2017, British cyclists won 178 world championships and 66 Olympic or Paralympic gold medals and captured 5 Tour de France victories in what is widely regarded as the most successful run in cycling history. (2)

While Ronnie may have altered forever the way food waste is managed in events (and otherwise), one-off events have remained characterised by their wastefulness. Their transience a blessing and a curse. But small gestures, much like David Brailsford’s marginal gains, can have an impact much more significant than their cost. Take, for example, the florist, witnessed returning at the end of events to collect the salvageable florals to distribute to local retirement villages. Zero-waste, little to no real cost, and an undoubtedly positive impact on the residents lucky enough to have their day brightened by fresh flowers. We can only hope that village management continued the good work and insisted that the flowers were composted on-site at the end of their life. Or the groundsmen who took the time to separate waste materials at events end, to ensure that still useful building materials were made available to local animal shelters.

These examples, and the many others that now occur every day in the world of temporary events, break down the stereotype of wastefulness by actually repurposing, reusing, and providing immediate charitable outcomes. Rather than holding out for the elusive moonshot that we seem to expect will somehow magically solve the problem of climate change.

Will these small gestures change the world? Not today, but as Ronnie and David would surely attest, they stand a solid chance of completely altering our collective tomorrow.

On a larger yet still approachable scale is the remarkable Sarah & Sebastian jewellery store by the award-winning Russell and George studio in Melbourne. It demonstrates how permanent structures can use temporal and adaptable modes of transformation to facilitate their ever-changing function. Their meticulous considerations don’t just extend across the lifetime of the space itself but also to the materials used. Ensuring they can be recycled and reused after the life of the design. Another example of how small accumulative actions can change the tide on how we deal with waste.

Much closer to home, we have recently been heartened by the number of Tasmanian signatories to the Architects Declare network. It was through our engagement with this platform that we recently decided to become a carbon-neutral studio. In the grand scheme of things, we know this is a marginal gain, but as we’ve seen, when taken together, marginal gains are not marginal at all.

As James Clear says in his book Atomic Habits, ‘In the beginning, there is basically no difference between making a choice that is 1 percent better or 1 percent worse. (In other words, it won’t impact you very much today.) But as time goes on, these small improvements or declines compound, and you suddenly find a very big gap between people who make slightly better decisions on a daily basis and those who don’t.’ (3)

The question is, will you do what you can, and will your choice tomorrow be 1 percent better or 1 percent worse. Or rather, how will we eat the elephant together?